It is with great pleasure that we introduce our new Mindfulness in Schools Project patron: Caroline Lucas MP. 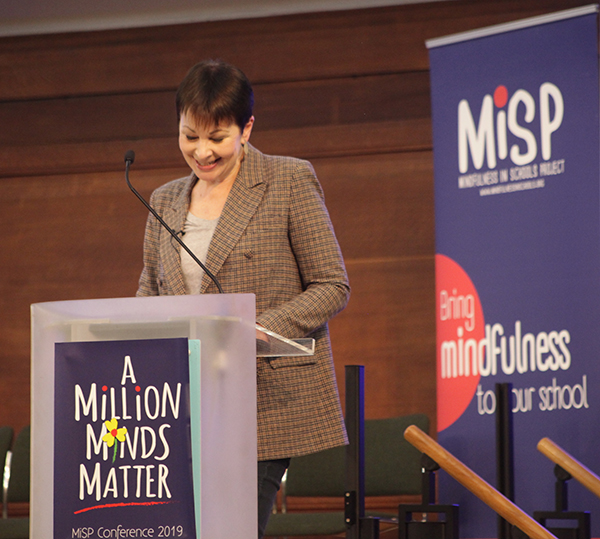 Caroline is a campaigner, a writer and the Green Party’s first ever MP, twice leading the party and representing Brighton Pavilion since 2010. She has written on subjects such as green economics, localisation, alternatives to globalisation, trade justice, animal welfare and food. In her time as a politician and activist, she has worked with non-governmental organisations and think tanks, including the RSPCA, CND and Oxfam.

Caroline was one of our key speakers at our 2019 A Million Minds Matter Conference where she revealed that mindfulness has not only deepened her own appreciation of the natural world, but she believes it also has the potential to inspire us to work harder to protect it, and to equip us with the strength we need to confront the true scale of the environmental crisis we face.

We are delighted to have Caroline’s ongoing support for our important work.

How were you introduced to mindfulness?

Last year I did complete the 8 week mindfulness course which – thanks to the Oxford Mindfulness Centre – was being run in parliament. And to be honest, if you can be mindful sitting upright in the leather-backed chairs of Committee Room 7 in the House of Commons, with the voting bells ringing and MPs’ pagers bleeping, it’s probably a pretty good training for being mindful anywhere! I try to get to as many of the follow-up weekly drop-in sessions as I can – but I’m absolutely no expert at all.

Why do you think mindfulness in important?

What lies at the heart of both mindfulness and of a relationship with the natural world is the art of paying attention, in the here and now.

That sense of being utterly present in the moment, at one with nature around us, enhances that experience – and is potentially transformative. I’d make the case that a deep appreciation of the natural world, a love for it, is a precondition for its protection.

Why mindfulness in schools?

I have had the honour of hosting a visit from the 16 year old Swedish campaigner Greta Thunberg, whose solitary vigil outside the Swedish parliament sparked a global movement of young people demanding we take urgent action on climate change. The Youth Climate strikes are one of the most inspiring and hopeful things that have happened in years, but there is a real concern that young people are becoming increasingly disconnected from nature – which not only has documented ill-effects on young people themselves in terms of increased stress – but it also means that we risk a younger generation growing up without exposure to, and understanding of, our natural world. Unless the next generation know and love what’s at threat, then I fear they’ll be less equipped to fight to protect it.

The answer is not just a greater exposure to, and understanding of, nature – although that’s something I’m campaigning for in parliament through the introduction of a new GCSE in Natural History – but a mindful awareness of it, an immersion in it and a feeling for it. A sense that we’re not separate. That what we do to the world around us, we ultimately do to ourselves. I think schools are the perfect place to start.

How can mindfulness in schools support positive environmental activism?

When we’re confronted with the scale of loss that we face – the climate crisis, the biodiversity crisis – we need help in dealing with our fear and grief, as well as support in finding the inner strength necessary to take the action necessary to address it.

Academically, theoretically, we know about the dangers of exceeding 2 degrees warming – but we rarely do we risk emotionally connecting with that reality.

And perhaps one of the reasons we don’t, is that we fear the darkness that might engulf us if we do. How do we cope with the thought that humanity may not wake up in time? That climate change might become irreversible? That societies, even in the developed world, might no longer have the ability to respond or cope?

And it’s in trying to answer those questions that I’ve turned to mindfulness.

If one of the main reasons for practising mindfulness is to achieve a deeper wellbeing for ourselves and others, then that surely has to encompass the larger world around us, on which our wellbeing depends.