In May 2018, Lucy Cavendish College, Cambridge, purchased four guinea pigs – a harmless (and in my opinion, adorable) measure to try and combat exam stress. “I recognise this is real pressure,” said Jackie Ashley, the College’s President, “and if the small, wet nose of a vocal little guinea pig bearing the name of an iconic suffragette or a novelist of genius can play its part in helping, I for one am pleased with the experiment”.  The Daily Mail did not agree, and the following are some comments on the article that discussed these “Snowflake students”:

“Oh for crying out loud. This generation are an absolute disgrace. Kids have never had it so good or so easy.”
(1 downvote, 26 upvotes.)

Contrary to what these commenters assert, the life of a young person in the UK isn’t all sunshine and rainbows – and snake-bites probably wouldn’t solve them. Student debt averages at £50,000+, the UK has the highest self-harm rates in Europe, and a university student in the UK takes their own life every four days. Safe to say, the mental health of students in the UK isn’t stellar, and like any university, Cambridge faces its own set of unique challenges.

Two months before the above comments were written, in March 2018, I had a chat with a stranger. The chat included discussion of suicidal thoughts, toxic masculinity, and depression medication, it went on for about an hour and, perhaps surprisingly, it happened in the Cambridge Uni gym. The reality is that conversations about mental health seem to burst out of every corner of the university, from Facebook memes and student union election hustings, to quiet chats over coffee/wine and even confessions in the gym – all with a passionate intensity reserved for few other topics. I’d be willing to bet that every student knows at least one person close to them who has had a mental health crisis – or have a story to tell themselves.

Incidentally, that  stranger in the gym became the co-creator for Feeling Blue? – within a few days of our conversation, the first interview was tentatively scheduled. We decided on a ~5 minute short film, and looked to include footage of 3 contributors …

By the time of its release in May 2019, we had conducted 30 interviews (120,000+ words of transcripts) and had received a further 39 video student video statements; we had issued dozens of Freedom of Information Requests to colleges on a variety of topics; we had analysed hundreds of pages of University administrative minutes, policy documents and strategy papers; and we had poured over student surveys and articles. To say the project snowballed would be an understatement.

Fundamentally, students we spoke to felt as though Cambridge University has a culture of high pressure on high (and often vague) workload, resulting in high stress – all of which sometimes generate a negative mental health landscape. A number of chronic cases from our film reveal upsetting and unsympathetic responses from certain staff members when reacting to a disclosed mental health crisis, and many undergraduates feel strongly that academia is prided above all else (extracurricular success and general wellbeing included). Freedom of Information Requests we submitted seem to confirm this – they revealed that Cambridge colleges collectively spend £1.06 million on ‘Scholars’ Prizes’ (rewards for academically high-achieving students), whilst only paying £617,000 into the University Counselling Service. The unique and complicated Collegiate University system means that despite coming 3rd highest on welfare spending per student  out of 47 UK universities (2017), this support is spread out across departments, colleges and central bodies, often leading to confusion and differing advice. Add to this rife inequality between colleges – Trinity College provides for its students an advisor for female students, a College nurse, two chaplains, a College counsellor and a mental health advisor, while Robinson College provides only a part-time nurse. Perhaps most worryingly, according to a number of anonymous sources, training for Supervisors and Directors of Studies is unpaid, much of it is voluntary and does not include any mental health awareness or safeguarding guidance. Despite this, many students credit members of staff with vital triage mental health help, and many in the administration seem to genuinely care about welfare.

The picture is complicated and uncomfortable, but through our 54-minute documentary film and our 60-page document of ‘Findings and Unanswered Questions’, we hope to strike a balance. At our screening on 4th May 2019 at the Cambridge Union, we had a number of audience-members offer up their own stories and share their feelings. Shortly afterwards, we presented both film and document to University representatives, and after some very positive meetings, we look forward to continuing the dialogue. Since then, the film (available for free online – see below) has had over 7,000 views and we’ve received dozens of messages from students, parents and alumni sharing their thoughts.

Feeling Blue? as an investigation is deliberately Cambridge-centric (and undergrad-centric at that) in an effort to deep-dive into one topic: to localise and nuance mental health and wellbeing journeys and challenges, to really unpick what unique cultural and institutional issues affect one University. A lot is said in the media and politics about how we “need to talk about mental health”, and yet so often efforts to write wide-ranging policy and codify universal responses, stories tend to be standardised and homogenised leaving out the complexity and individualism inherent in the topic. So myself and the documentary team decided to focus on what we knew best – our personal university experience. Our hope is that graduate students at Cambridge, and students from historically excluded backgrounds, are inspired by Feeling Blue? and embark on their own research or film. We would also love if students at other universities, and even non-students in different regions, workplaces, religions or ethnicities, tackled the topic of wellbeing and mental health from their unique l and heterogenous perspectives. We are far from experts, but we’d love to help anyone embarking on their own investigation, if we can.

This isn’t the first step, and I am sure it won’t be the last. But I hope it’s something.

Watch Feeling Blue? on You Tube by clicking below: 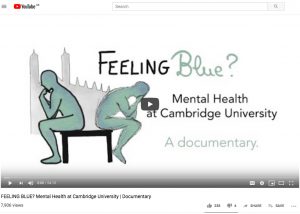