MiSP’s aim with A Million Minds Matter is to reach one million children with mindfulness in classrooms across the UK. Our recent conference was an important step in that direction and the feedback we have had has been humbling and inspiring. What made the speakers so compelling was in part how different they all were to each other. Ruby Wax and Jerome Flynn; Caroline Lucas and Jason Steele; each had a different take on mindfulness and a unique way of expressing it. At almost every level, the diversity of the Young Person’s panel chaired so skilfully by Radio 1’s Cel Spellman was striking.

And yet, of the 650 people in the audience, I would guess that about 550 were women. One of our speakers, Vidyamala Burch, told us that a recent survey to ‘map’ mindfulness found that 80% of adult mindfulness teachers were female. Planet Mindful, Breathe and In the Moment are relatively new magazine titles pitching at a largely female readership. At the Mindful Living Show you’d have been more likely to bump into your sister or your mum than your brother or your dad. And as entertaining as it is, the cover of the spoof Ladybird Book of Mindfulness speaks volumes: a fairy tale blonde in a fluttering white dress floating through a field of daffodils and butterflies.

Perhaps in these days of gender fluidity it shouldn’t, and I wholeheartedly agree that for any of us to be defined, undermined or constrained by our gender is not only old-fashioned but wrong. Indeed, the Ladybird stereotype of the feminine is in its own right a challenging one. And besides, there is no shortage of men in the mindfulness field. Indeed, even if only a consequence of broader power imbalances, you could argue quite plausibly that there is a male skew to those leading the mindfulness field – the academics driving the research, the entrepreneurs building the apps and, yes, the founders of mindfulness charities. So even after such an inspiring conference, why does it worry me that there were so few men in the audience?

I think it worries me on a number of different levels. At the most obvious and quantifiable level, it worries me because men kill themselves a lot more often than women. In the UK suicide is the biggest killer of men under 45. As Professor Katherine Weare once told me, even if you think this ‘mental health crisis’ we talk about is a fiction – a tweak in taxonomy and how we categorise ‘mental health’ – you can count body bags, and three men kill themselves for every one woman. To claim that mindfulness prevents suicide would be a reckless overclaim at this stage in the life-cycle of the evidence-base, but we can be reasonably sure that it helps to prevent depressive relapse (recommended by the National Institute for Health and Care Excellence since 2004). To say that mindfulness is for mental health what physical exercise is for the body is not without foundation. I wonder whether if men felt mindfulness was more ‘for them’, it might at the very least nudge the bell-curve of their mental health a little further in the right direction.

So how do we help men to feel that mindfulness is more ‘for them’, particularly as the inexorable tide of commercialisation wafts mindfulness downstream to the more immediately profitable shores of women’s interest and lifestyle media?

I have mixed feelings about mindfulness ‘apps’. However, if there is truth in the theory that one of the reasons men kill themselves more frequently than women is because they are less able to admit they are struggling and seek help, apps are a great way for them to ‘have a go’ at mindfulness without ‘coming out’ as somebody who is vulnerable. I have a lot of time for Headspace as it is not too ‘soft and fluffy’ to alienate those who perceive themselves in more traditionally ‘masculine’ ways.

But the other place that we can make a real difference to how mindfulness is perceived is in schools and in the classroom. Firstly, this has to happen at the level of teaching staff. Our A Millions Mind Matter conference may have had a strong female bias primarily because nearly 70% of teachers in the UK are women, rising to over 80% in primary schools. However, engaging male teachers with mindfulness is critical if we want it to connect with boys, particularly those who live without a role model in circumstances that make them vulnerable to mental ill health. Jason Steele, founder and CEO of Raise The Youth, has many inspiring stories about this. 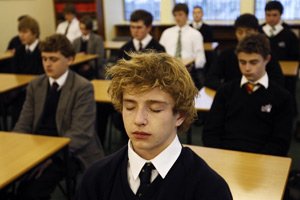 It is also a matter very close to my heart as I teach at Tonbridge School, one of the UK’s leading independent boys’ schools. Nearly a decade ago Tonbridge became the first school in the UK to put mindfulness on the curriculum for year 10. Part of the enduring appeal of MiSP’s .b curriculum and a reason why pupils took to it very quickly is that it was written to overcome the deep scepticism of 14 year old boys. We had to avoid being in any way ‘floaty’ or ‘angora sweater’ if we wanted to connect with this hard-to-please age group.

I say this whilst fully aware of the much broader cultural issue about what masculinity is. “This book is about what I think masculinity is, and questions whether masculinity is working for us, making us happy” writes Grayson Perry in his “The Descent of Man”. When I discuss this with boys at Tonbridge they really ‘get it’; they understand that wearing an emotional suit of armour can be unhelpful. Mindfulness sits comfortably with masculinity because they see enough of their teachers practising it. They know that you don’t have to be tough to be strong.

But if the image of mindfulness in the mainstream drifts too far in the direction of the Ladybird lady, my fear is that the access to it for boys and men will narrow and its huge potential to address issues of mental ill health be limited.

A compelling way to address this is via male role models and two of the ‘celebrities’ at our A Million Minds Matter conference did this admirably.

Firstly, Jerome Flynn. There is so much banter and brawn in Bronn, the character he plays in Game of Thrones, that we know Flynn can ‘do’ Alpha masculine. But on stage in London that day he had no character to hide behind. What made it so moving was not just how strongly Flynn felt about issues of mindfulness and mental health but how vulnerable he himself was prepared to be. To take off your emotional suit of armour in front of nearly 700 people is no mean feat.

Secondly, Ceallach Spellman. Every Sunday at 4pm on Radio 1, Cel and Katie Thistleton host ‘Life Hacks’, with often heartfelt and touching discussions about young people’s issues of the day. At our conference Cel chaired an on-stage discussion about mindfulness with six young people. What was striking and impeccably mindful was how Cel completely removed himself as the centre of attention and simply listened. He was the ‘celeb’ yet it was never about him.

If mainstream mindfulness continues to waft towards what many think of, rightly or wrongly, as ‘feminine’, I hope the world hears more from these two. It might help us boys and men to question not only how we perceive mindfulness but what we think it is to be ‘masculine’.

See photos from the MiSP 2019 Conference.