Gogglebox on Christmas Day at 9:15pm was not where I was expecting to find mindfulness.

For those of you who don’t know what it is, Gogglebox is a TV show where you watch other people watching telly. A form of reality TV, imagine a camera on the TV itself, looking back at the viewers in their armchairs and sofas, and showing you their reactions to whatever was on that week. Now in its 18th season, this Channel 4 series is hugely popular. I usually begin watching it because my older children like it but end up enjoying it and feeling unexpectedly proud to be British. However curated and artificial it may be, Gogglebox offers a snapshot of how wonderfully diverse the UK audience is and what an important role humour plays in bringing us together.

This Christmas Day special was showing highlights from 2021 and so far we’d seen the Gogglebox gang reacting to I Can See Your Voice, Nadiya’s Fast Flavours, Mastermind, Ready to Mingle, Strictly Come Dancing, Squid Game, Sex Actually with Alice Levine, Line of Duty, The Mating Game and An Audience with Adele.

How, then, did mindfulness get onto Gogglebox?

It wasn’t a cookery programme with a Great British Bake Off victor, a cult-hit South Korean thriller, one of the BBC’s biggest ever police dramas or the star-studded comeback of a globally successful singer songwriter. And it definitely wasn’t a wildlife documentary about the mating rituals of flamingos and bowerbirds.

No. We were about to observe this entertaining sample of Brits watching a Headspace collaboration with Netflix called Headspace Guide to Sleep. I already knew about the Headspace content on Netflix and had clocked it as another significant indicator of how mainstream mindfulness was becoming. I was, metaphorically at least, holding my breath. How would the Goggleboxers respond?

The first thing I registered was that the Gogglebox producers had chosen a Headspace episode that was in the sweet spot of mainstream mindfulness: mindfulness as a break from our digital devices and mindfulness as a way of helping us get to sleep.

“Are your devices keeping you up at night?” asks the soothing voice of Headspace’s Eve. “YES!” shouts Ellie from Leeds, startling the poor greyhound nestling in her lap. “My devices ARE keeping me up of a night-time” agrees Daniel from Brighton.

I do my best to let go of the fact that, for all its beauty and depth, meditation was being cast on national TV as a kind of melatonin substitute, something that helps you get to sleep, but if this is how it helps people then, well, why not? MiSP’s Beditation practice has a similar aim. When Anne from County Durham is grateful for this opportunity and says “Oh brilliant, thank you very much, pet”, she means it.

“Let’s begin the exercise by lying flat or at a comfortable recline, relaxing and sinking down” continues Eve.

And as I watch the various characters shuffling into different positions, some stretching out on their sofas, others sinking more deeply into their armchairs, it occurs to me how similar this is to trying to teach mindfulness to teenagers in a school classroom. They haven’t chosen to be doing mindfulness as adults on a ‘normal’ mindfulness course have. They will instinctively want to chat to each other. They will give you a chance and have a go, but only for a certain length of time before they make up their minds as to whether it is or is not ‘for them’. And they will be playful.

When asked to bring attention to the breath, Sophie from Blackpool teases her brother, Pete: “Yours stinks so don’t bring any attention to that!”, and he laughs. With a mischievous glance and raising of the eyebrows, Daniel chooses to rest his head in the lap of his husband, Stephen. Mica asks her partner Marcus “You comfortable like that, baby?” and he replies “I’m grand. I’d be even more comfortable if you’d stop talking”. 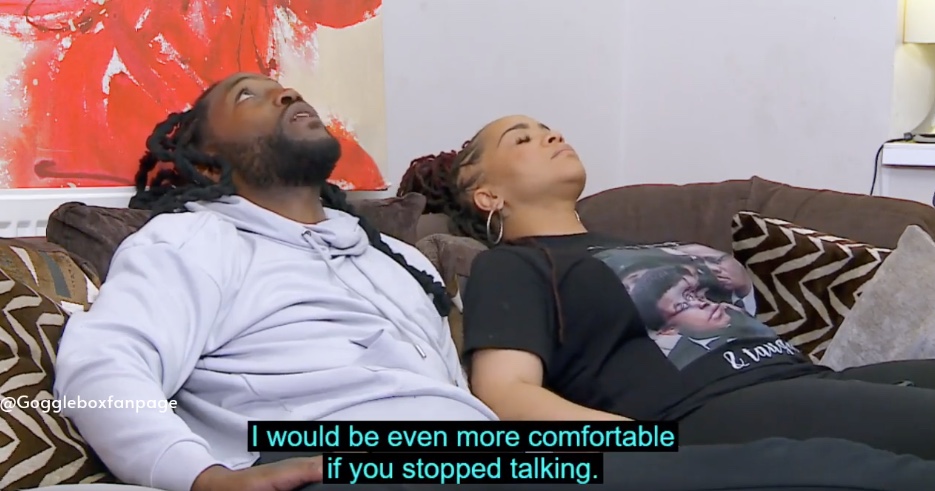 When they are invited to breathe in to the count of four, Daniel says “I can only breathe in for two”. When they are asked to hold it for four, Sally from Birmingham comically waves her arms as if she is suffocating. And when told to breathe out for 6, Sophie’s patience finally expires: “I’m gonna pass out. It’s s***t this”. “How long is this going on for?” protests Lee from Hull. Julie from Manchester sneezes. “How are we going to sleep when you’re sneezing” complains her husband, Tom. Meanwhile, Izzi sees her sister Ellie reclining peacefully and hurls a furry black cushion at her, howling with laughter.

For some, the invitation to “count backwards from a thousand to zero” is greeted with shrieks of horror, an “It’s boring” from Stephen and a “F**k that” from Ellie. But for others it seems to connect. Marcus and Mica lie back on their sofa, still; Jenny topples towards Lee and rests her head on his shoulder; in Wiltshire, Giles gently lays a blanket over Mary to keep her warm.

This 5 minute Gogglebox sequence is much closer to the challenge of teaching mindfulness to teenagers in the classroom than you might imagine. Things are slowly changing and whilst more young people are trying mindfulness through apps like Headspace than even two or three years ago, for the majority it is still rarely on their map. The entertainment and social media world that surrounds them is far bigger and more exciting than any mindfulness animation or classroom teacher.

If you stand in front of a teen classroom and press play on an animation then, however good it is, the responses are likely to be Gogglebox-esque. The language may or may not be as colourful as “It’s s**t this is” but, amongst those who instinctively respond positively, all you need is two or three negative reactions and the dynamic in the classroom can be lost. And if you lose the dynamic and keep on plugging away trying to teach mindfulness, there is a good chance you will do lasting damage to how certain groups perceive it.

When done skilfully it is, of course, possible, which is why our work at Mindfulness in Schools Project remains so important. The most obvious missing link in the Gogglebox piece was the humanity, the person in front of them that they liked, that they trusted, that had a pre-established rapport with them and whom they immediately knew ‘walked the talk’. Another key ingredient missing was context. For healthy evolutionary reasons, adolescents in particular need to know “What is the point?” and ‘the point’ of learning mindfulness is likely to be very different for different individuals.

And it isn’t only the children and young people who could do with understanding ‘the point’. Gogglebox was also a reminder of what a significant task lies ahead of us in educating the adults. If you are reading this you probably know that mindfulness and meditation offer so much more than just helping us get to sleep, but sometimes we fall back on the lowest common denominators in our rush to connect with as many people as possible. There are many pathways to implementing mindfulness in schools, and deploying it tactically for sleep and anxiety may be one of those, but perhaps there are others? I wonder if the innate creativity of young people themselves holds the answer.

What the Gogglebox experiment did show us, and what I urge all mindfulness teachers to cherish, particularly in schools, is a sense of humour. As well as being a healthy antidote to piety and preachiness, the ability for us all to laugh at ourselves and to accept with an open heart that mindfulness is not going to be everybody’s cup of tea is a very precious one.