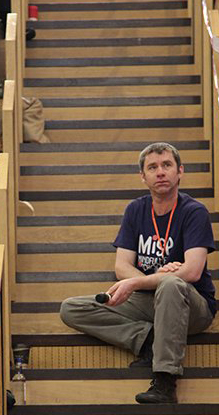 In 2013 I was Deputy Headteacher at a large primary school in Penzance, Cornwall. My Headteacher at the time gave me a flyer and suggested that I might like to attend a Mindfulness in Schools event being run by Mindfulness Cornwall in conjunction with Exeter University as, “You’re into yoga and that hippy stuff.” It became clear very quickly at the event that this wasn’t yoga or indeed anything “hippy,” but a well-researched, scientifically-grounded secular practice which had the potential to impact positively on young people’s lives – not just for the difficult stuff, but also to help well being and a sense of flourishing.

I was blown away by the day and the practices from .b that were shared with us. I couldn’t wait to get this into school – primary materials were on the way. As a teacher, I was used to picking up materials and running with them with a class. This was different. I was told that I would need to complete an 8 week adult Mindfulness course and practice afterwards before I could train to teach mindfulness to children. I’d had an on/off yoga and meditation practice since my teenage years and couldn’t really see the need for this. But, recognising that this was a prerequisite step, I negotiated with my Headteacher to be allowed out of school on a Tuesday morning to take part in a Mindfulness Based Stress Reduction course with Mindfulness Cornwall. I would fund the course myself and make up my missed work elsewhere in the week (fortunately, adult courses are now more accessible – MiSP run .begin, a live face-to-face online course in the evenings).

I was doing this course for the children, I didn’t need it …

A couple of sessions into the course, reality hit home. I, like a large percentage of the teaching profession, was incredibly stressed. In fact, stress had become a habit in itself and I had largely ceased to be aware of it. A churning washing-machine of thoughts would tumble around at night, disturbing my sleep, leaving me feeling drained, tired and lurching towards the weekends … with barely enough energy left for my own children. I had a tendency to exercise too little and to consume far more crisps than I ought to be doing! The course became for me.

As we progressed through the 8 weeks, I began to become more aware of my own habit patterns and the mindfulness practices from the course started to impact positively on my life. People began to comment on how calm I was and that I “looked better.” Not quite sure how I had looked and acted before, but something was changing. I slept more deeply and stopped waking in the night, felt more compassion towards myself, seemed to find it easier to concentrate on things … the sense of time pressure receded, I could leave my to do list behind when I went to bed (rather than it stalking my dreams) … I felt like a better parent.

Living more mindfully began to impact positively on my teaching – I taught mindfully. Rather than having a whirlwind of thoughts bashing about in my head all day, I was better able to focus on the actual act of teaching. I was more present for the children I was working with and managed my own reactivity and stress far more effectively. I was amazed at how mindfulness had improved my ability to teach.

Then, in August 2013, things changed completely.

We found out that my wife’s lungs were riddled with cancerous tumours. After a multitude of tests and visits to the doctors and hospitals, my wife was diagnosed as having stage 4 melanoma. In the absence of new treatment, she was given 12 months to live.

Sleepless nights, constant “What if” thoughts, worry, concern and fear became my constant companions. Recognising that I needed some help, I visited my GP (who was excellent throughout this period – a kind, compassionate human being). I was diagnosed, unsurprisingly, with severe anxiety and mild depression. This changed over time to severe depression.

Fortunately, my wife was referred onto a pioneering trial of immunotherapy and responded well to treatment. 5 years on, she is free of disease thanks to the treatment and care that she received from the NHS.

In terms of developing our mindfulness practice, Jon Kabat-Zinn writes, “Make sure you weave your parachute every day, rather than leave it to the time you have to jump out of the plane.” From the moment of diagnosis, I was weaving a parachute in freefall … I hadn’t chosen to jump, but I was in freefall nonetheless.

As I sought to negotiate anxiety and depression, the feelings of emptiness and despair that abounded and the physical fatigue of worry, my fledgling mindfulness practice became a space to work with the horror of the situation that we had found ourselves in. The parachute formed. I had the support of a superb counsellor, who was also a mindfulness practitioner and teacher. Through talking with her and through sitting with the extreme unease that I felt at this time, through opening to it and breathing with the sensations in my body, things began to settle – much like a shook-up snow globe will settle when it is brought to stillness. Even in the midst of hospital visits and endless scans (when outcomes were unclear), I felt an increased sense of wellness, wholeness, togetherness and a steadiness to work with what was present. Without this parachute of mindfulness, I am sure that this time would have been very different. It felt as if we were flourishing once more as a family.

I then wanted to share this practice with everyone.

In early 2015, I trained to teach MiSP’s Paws b curriculum for 7 to 11 year olds and went straight back to school to teach it to my Year 5 and 6 class. My class were curious about mindfulness – I had been open with them about my own mental ill health and how I had worked with it. Teaching mindfulness is like sowing seeds – you can never be quite sure when they are going to germinate and grow. My class had enjoyed the lessons and I was curious to see what would come next.

On Year 5 camp that June, one of the boys from my class got stuck halfway up a climbing wall. He couldn’t go up and he couldn’t come down. The instructor tried all sorts of strategies to persuade him to move, but he remained frozen to the spot. Quite literally gripped with fear, holding the wall tightly to prevent a mortal plummeting to the ground 5 feet below. At which point, one of the girls in my class shouted up to him, “Don’t worry, it’s just your amygdala!” (The amygdala is covered within the neuroscience aspect of Paws b – we look at the reactions to fear/threat of fight, flight and freeze). The boy on the climbing wall let out what can best be described as a caveman grunt, took several breaths (taking himself through the Paws b practice) and then smiled. After discussion, he decided to come back down to the ground. Normally this perceived loss of face would have resulted in anger, upset or both. Somebody would probably have teased him about it. None of this happened – both the boy and his class mates recognised the reaction that had occurred; they were incredibly kind to him.

Then, in Year 6, the same boy sat down to take his Maths SATs – which, for him, was the equivalent of facing down a sabre-toothed tiger. He froze, gripped the sides of his chair, slumped forwards and dissolved in tears on top of his paper.

“Do you remember the climbing wall?” was all I needed to say. He sat up straight, rested his hands on his legs, closed his eyes and followed his breath. Moments later, he opened his eyes, took one more deep breath, opened the paper and got on with answering the questions. This was a WOW! moment for me.

His results were great – illustrating the link between wellbeing and attainment – but what really affected me was how calmly he was able to meet the difficulty that tests represented to him.

There have been many more instances like this in the following years… a child with ADHD and anger issues running into my classroom at lunch time, shouting, “I’m starting to react” at me and then sitting down, closing his eyes and taking himself through a practice called FOFBOC … a hall full of Year 6 sitting and practising together before SATs … a child calming themselves through extreme turbulence on an aeroplane … footballers keeping their cool after a bad tackle rather than exploding at the referee.

I’d started to be brought out of my school in the autumn term of 2015 to teach mindfulness in other schools. In December 2015 I started teaching .b Foundations to my own staff. Two things have stuck with me from this period.

Firstly, the amount of mental ill-health being experienced by my colleagues. I had known many of these people for 10 years as colleagues (both as Deputy and Acting Head) and many as friends, but hadn’t been wholly aware of how much school was affecting some of them.

Secondly, how beneficial the course was for many of the participants. There are a number of people who said that they would have left the teaching profession without it – a move from surviving to thriving. My favourite quote from this course is that “Doing a .b is even better than beta blockers!”

I stepped back from being a Deputy at the end of 2015. I taught two days a week in school and started to teach mindfulness in other local schools and colleges. In early 2016, I started working as a trainer for MiSP which continued a journey that has now led to me working full-time for MiSP and well as being an adult mindfulness teacher.

I am humbled by how mindfulness has positively affected students from 7 to 18 and the adults who work with and/or care for them.